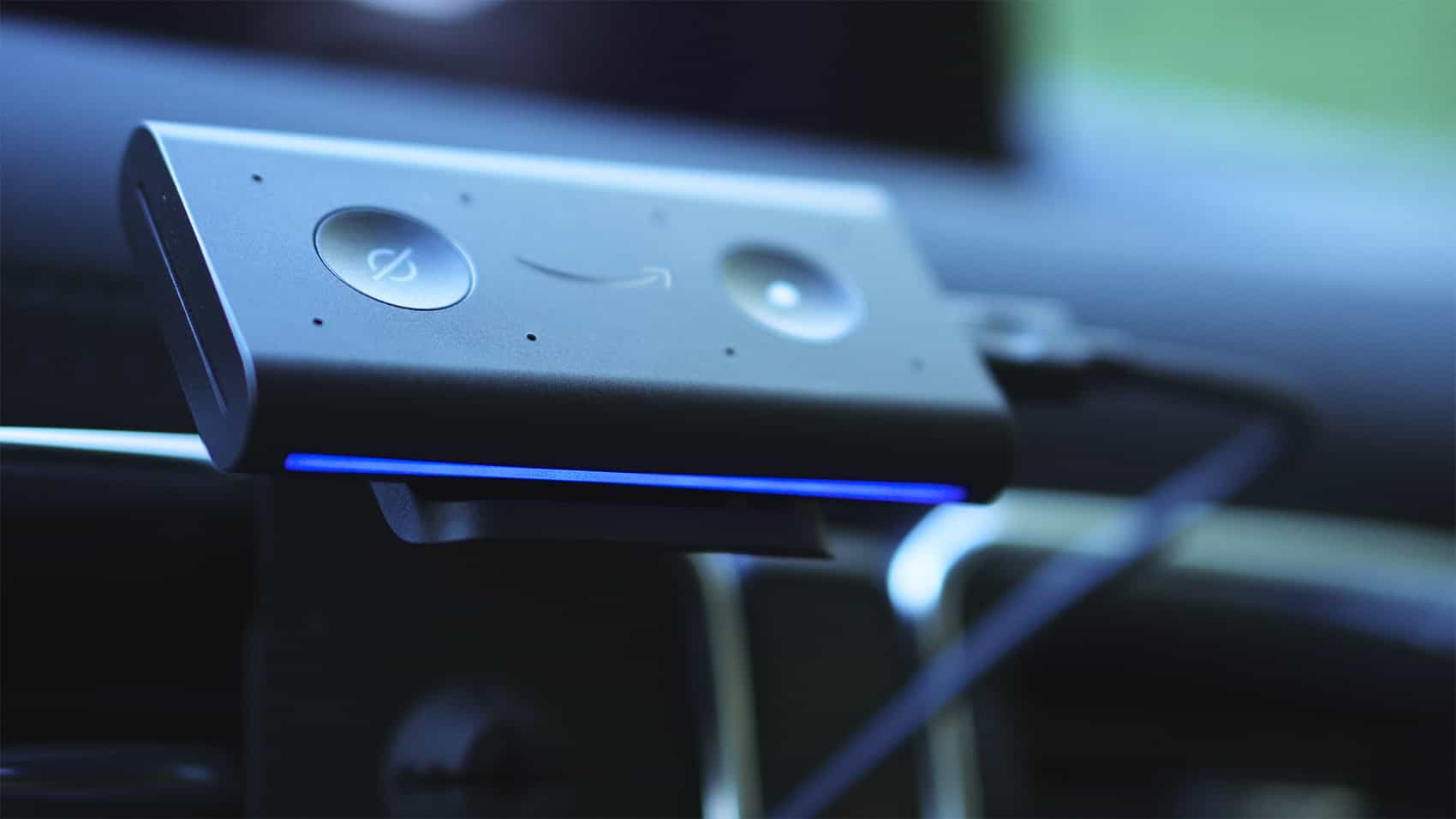 Amazon Echo Auto Review – Use Alexa in Your Car!

Watch the full video above or read the lightly edited transcript below.

Today we are looking at the new Amazon Echo Auto. I was really excited to be invited to purchase, which is a funny concept, but that’s the world we live in, and I just got it in the mail. I’m super excited to get in the car and show you what it’s like.

So the review is going to be in three parts:

So when you open the box, there’s actually two boxes inside that comprise in total, the Amazon Echo Auto system. And so first you need a way to actually mount it in your car. So let’s look at how you actually set that up. This is a standard vent clip style. It’s adjustable in the back. So you’re able to resize this according to the size of your vent grills. I don’t know what you call those – individual slats in your vent – to ensure a good fit, because you don’t want this flopping around.

Next is setting up the actual Echo device itself. Opening the box, you have a standard 3.5mm audio cable that you can use to set up via an Aux input. So if you don’t have Bluetooth in your vehicle, you are able to still use Echo Auto by just using the audio cable.

Taking other pieces out of the box, you see the Echo itself. It reminds me of like a USB hub almost. So pretty small. You’ve got the microphones on top, you’ve got the nice little light up bar whenever you ask Alexa to do something.

The power cord input jack is on the right of the device. It’s powered by USB. And so you simply connect it to the side of the device and then the USB goes into a standard DC USB double connector, which is nice. So you can actually also potentially charge another device – that was nice of Amazon to include that.

Set up Echo Auto Using the Alexa App on Your Phone

Setting up the device is all done through the app – just your standard Alexa app, there’s no different separate app for Echo Auto. Open the app and go to “devices” and you have to add a device – there’s a little plus button you need to tap.

And when you do that it gives you a list of available devices (there should pretty much be only one at this point). You pick the correct device and then it will then initiate a connection to the Echo Auto from your phone via Bluetooth. By the way, you need to have your car on at this point because you need to have power going through to the Echo Auto device to do the setup process. And from there it walks you through the rest of the process. Pretty simple.

There’s a little nice video welcoming you to the device and gives you a quick overview of things that you can do using Echo Auto. And it also plays back a tone because it needs to ensure that it’s set up correctly and that it is actually playing sound back through your car stereo. So there is a point where you need to play a sound and that will come through and the Echo Auto will recognize that the setup has completed properly.

Why Do You Even Need Alexa In Your Car?

So why Alexa in your car? People love Alexa in their home. We love it in our kitchen and pretty much every room in the house except for the bathrooms because that seems excessive. Alexa in your car can bring a lot of value in a lot of different ways.

A lot of folks do have hands free systems in their car already. This car, the 2019 Mazda CX-5, does come with CarPlay. I do have Siri and Siri’s fine, but sometimes I run into things where I would love to have just a little bit better support in certain areas or kind of all of the Amazon Alexa stuff that I love my home-based Echoes – to be able to do that in the car.

There’s still a lot of cars out there that don’t have any sort of assistant on board. So you know, for all of those folks, I think something like Alexa definitely makes a lot of sense. You’re basically using your existing Bluetooth. Most modern cars, even if they don’t have some sort of assistant in the software of the car, they will have at least Bluetooth, but if not Bluetooth, they might even just have an Aux cable. Of course, you do need to be tethered to your phone. So that’s the other important thing to know. You still need a Bluetooth connection back to your phone. Echo Auto does not have its own cellular plan or Wifi. It’s not an independent device, it’s really dependent on your phone to drive all the Internet actions.

So I think some of the most common uses that I could see for Echo Auto are all those things that I’m doing during my commute that I can’t use my hands for.

And a lot of that is listening to music. You gotta pass the time some way. Music is definitely one of the things that most people do. And with Alexa, you have pretty much all the major streaming platforms. I’m talking about Amazon music, obviously Spotify, which is what I use. I’m a huge Spotify fan and they recently added Apple Music, Pandora, Stitcher, any of the big guys that are out there. So that means that you suddenly have access to all of those music libraries hands-free in your car, which is pretty amazing.

Listen to Audible Audiobooks During Your Commute

The other way that I really enjoy trying to pass the time during my commute is audiobooks or other sort of educational information. So with Alexa, you have access to your Audible library. So I also happen to be an Audible subscriber. I love listening to audiobooks when I’m out and about, I find it best on routes that you’ve done hundreds of times so you don’t have to concentrate too hard on directions.

I blaze through books because it just takes forever to get where I’m going during my daily commute. So to be able to ask Alexa to play your most recent audiobook from where you’re at is amazing. That’s such a huge win in my book just because you’re able to do that hands free – I can’t do that even with CarPlay. So that’s an important distinction there – a point in Echo Auto’s favor.

Next, Echo Auto uses Alexa to connect back to your contacts on your phone and call using the Bluetooth connection. Again, can I do that with Siri and CarPlay? Yes. But if you don’t have anything like that, that’s a huge win to go hands free.

You can ask Alexa to navigate you somewhere, which is very cool. If I were to use Siri to navigate somewhere, I’m in Apple Maps – and nobody, nobody wants to be driving around using Apple Maps. So that’s a great feature of Echo Auto: you can pick your navigation app of choice so that when you summon Alexa to get you to a place, she will use Google Maps, Waze, or another preferred maps app of choice. So that’s much better than CarPlay.

Another important point that people always bring up when they talk about Alexa is privacy. Are you introducing microphones into your car? Yes. Does Amazon record every conversation that you have when you ask Alexa to do something? Yes. Can you delete those recordings? Yes. Are they really deleted? Who knows. With any piece of technology when it comes to privacy, it’s always a trade off between convenience and privacy. And you have to make that decision for yourself: what you’re willing to give up, what you’re willing to keep. You need to do your own calculus here: does the convenience outweigh the privacy concerns?

At the time of writing, Echo Auto retails for $49.99 in the US (and is often subject to Amazon device deals). For the cost, you really do add a great deal of additional functionality and convenience to your drive. And let’s be clear. None of this is mandatory. It’s all just an add-on for fun, but it does add a lot of convenience that you’re not going to get in just your phone. Your phone and that hands-free experience – it’s just not going to beat what you’re going to get from some additional hardware.

So, is this Stuff Adam Likes?

Is this Stuff Adam Likes? The answer is yes. Echo Auto can really upgrade your drive in powerful ways, especially if you don’t currently have any sort of hands-free intelligent assistant already built into your car. I think that’s the main target demographic for this. But even if you do, using Alexa to access all of the Amazon ecosystem and all the amazing apps behind that and the music control, the voice control – it just does some powerful things and controls things in a finer way than I can even do with CarPlay through Siri. So I really recommend it. I think the price is very reasonable at $50 retail, but an even better deal when on sale for less. So I think it’s really worth checking out to see if it really does make a difference for you. But I think it will. Drive safely.

Tl;dr: Amazon’s Echo Auto is a fairly straightforward way to add all the convenience of hands-free Alexa in your car – a benefit that will resonate most with those who don’t current have any integrated assistant or are deeply invested in the Amazon ecosystem.