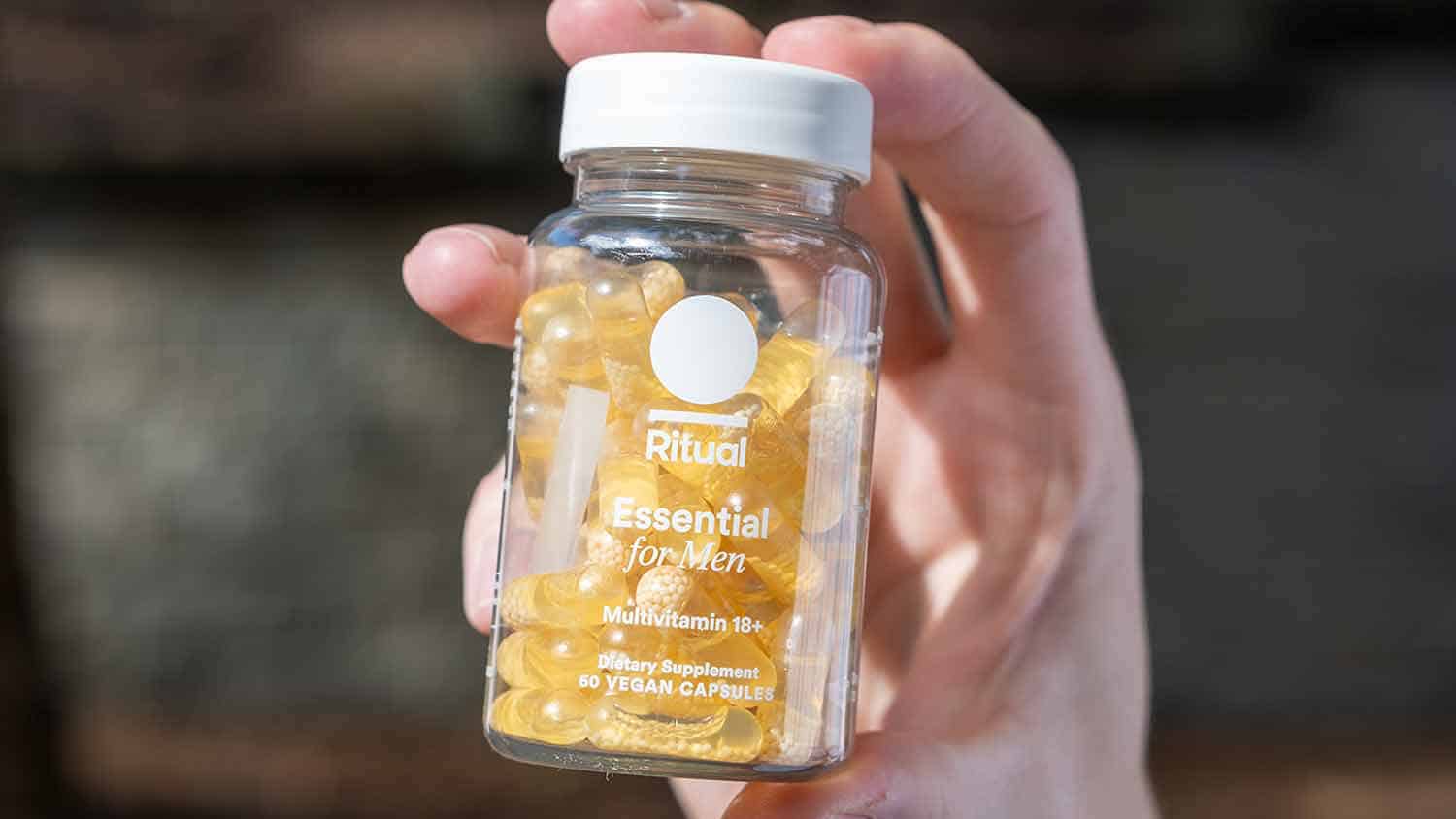 Watch the full video above or read the transcript below. If you buy through some of the links, I may earn a small share of the profits. Prices and availability are subject to change. Learn more on my Disclosures page.

Should You Take a Multivitamin?

Should you take a multivitamin? Let’s see here… I don’t know. I’m not a doctor. I don’t even play one on YouTube. This is from a Rick and Morty Halloween costume.

But what I can tell you is why you might want to consider taking a multivitamin, and if you do, why you might consider trying Ritual and their new Essential for Men Vitamin.

My history with multivitamins is I bought them in bulk from Costco, took one every day and didn’t think about it. Then I kept coming across articles that had conflicting information about whether vitamins were helpful or not. So eventually I stopped.

Fast forward a few years, and after becoming vegetarian, I did start to wonder whether I was meeting all my nutritional needs through diet alone. So when the folks at Ritual reached out about trying their new multivitamin for men, I thought it was a great opportunity to revisit the entire topic of nutrition and supplements.

How Do You Know if You Should Take a Multivitamin?

Ok, so why might you want to consider taking a multivitamin? Of course, the most scientific reason would be if you had a recent blood test that checked for vitamin deficiency, and you’re coming up short in some areas. If that’s not an option, the second most scientifically valid reason based on my research (again, NOT A DOCTOR) is to review the thousands of medical research studies around various vitamin deficiencies, and follow those recommendations.

What’s that? You don’t have medical training or hundreds of hours to do that research yourself? Luckily there’s highly reputable resources out there where nutrition experts actually DO read all the studies and then make common sense recommendations anyone can understand.

My favorite resource in this regard is NutritionFacts.org, a non-profit site run by one of the leading physicians in the nutrition world. What does the research recommend? Not surprising, major studies seem to suggest that a varied and highly nutritious diet should be your plan A when it comes to meeting your needs for vitamins and minerals.

However, these same studies suggest that it can be difficult to meet all your key nutritional needs through diet alone, which is due to a variety of factors, including environmental and genetic causes.

That concept – the challenge of getting all the key nutrients you need from diet alone – was the starting point for the team at Ritual when formulating their multivitamins, first for women and then a separate pre-natal line, and then also for their new men’s line. Instead of including 2000% recommended daily value of every known element in the galaxy, they took the approach of – let’s see what studies and leading health authorities say the common GAPS are in people’s nutrition, and design a supplement that’s targeted to fill those gaps.

And that’s exactly what they did when they created the Essential for Men – figured out the exact set of nutrients men’s diets might be missing, according to the literature, and bundled them into one easy to take pill. Less is more. I like that approach.

And not only did they isolate those key nutrients, they also did their homework to find the best quality sources and forms of those nutrients. It turns out not all forms of, say, Vitamin B-12 are equal. One form, which is cheaper to make, is harder for the body to absorb. They went with the better version. That’s just one example – across all 10 nutrients they really went out of their way to find the best of the best.

Amazingly, they also managed to find all vegan sources of those nutrients. Many vitamins and supplements sold today contain some animal ingredient, which is a non-starter for vegetarians and vegans – a group that may need dietary supplements even more than omnivores. Can you track down vegan sources of these nutrients yourself, and take them separately? Yes, but the convenience of having them all in one package really can’t be beat.

Taking the Essential for Men Multivitamin

So, what’s it like actually taking them? I really appreciate how much thought they’ve put into elevating the experience of taking vitamins. I mean, sure, it’s just popping a couple pills, but that doesn’t mean there aren’t things you can do. For example, by including a  mint tab in the bottle (it’s not edible so don’t try!), you get a really nice scent when you open the bottle and then as the pills go down when you swallow. Nice touch!

I also just really like the design of the capsules themselves. My skepticism with the old multivitamins I used to take was – how much would this hard, rock-like tablet actually break down during digestion, and actually get absorbed on its way through? Ritual intentionally designed these capsules so they’d last until the right point in your small intestine, where nutrients can be optimally absorbed.

In this completely non-scientific test where I put a capsule in a glass of plain tap water, it did hold up for hours before finally breaking down and releasing the oil and little nutrient balls. Of course, stomach acid is quite different – again, in no way was this a scientific experiment proving anything. But I thought if they instantly started to break down when put in water, I would have doubted the “delayed release” claims being made.

So, are there any downsides? First, the cost can’t be ignored. At $30 / month or about a dollar a day, this simply might not be in the budget for some people, especially if you’re not used to spending anything on vitamins, or buying a year’s supply for $20 like you might at Costco. That being said, it’s hard to put a price tag on improving your health and wellness.

Next, about 20 minutes after taking the two vitamins, which is the standard dose, I burped and could almost taste / smell something – it was almost fishy in nature, which of course as a vegetarian was a bit off-putting. This was most acute when I took them and didn’t immediately eat anything afterwards, and was less so after I did chase them down with food. I assume it was just the oil in the capsules starting to break down in my stomach.

Lastly, there’s still just the whole question, which it doesn’t seem the scientific community has reached consensus on, is whether you actually need to take a multivitamin, even one as super targeted as that being offered by Ritual. This of course is a question that will have a different answer for everyone based on your diet and genetics, and the recommendation of your doctor.

Is This Stuff Adam Likes?

With all those caveats noted – is this Stuff Adam Likes? Overall, I’d have to say yes. If you’re going to take a multivitamin, I do recommend the Essential line by Ritual. It meets all the core requirements for something to be Stuff Adam Likes – it has premium ingredients, is thoughtfully designed, and can improve your life. It’s certainly an upgrade over every other multivitamin out there.

But again, I can’t stress this enough – the answer as to whether or not you should take a multivitamin is a conversation between you and your doctor. The answer varies so much person to person that I think it’s hard to make any blanket recommendations here.

If you’ve tried this I’d love to hear your experiences with it – find me on social media or YouTube and share your thoughts!

Tl;dr: Ritual’s Essential for Men is the upgrade multivitamin pick for those serious about their health.